Caroline Flack and Harry Styles are back together (or are they?)
admin / 13 January 2012 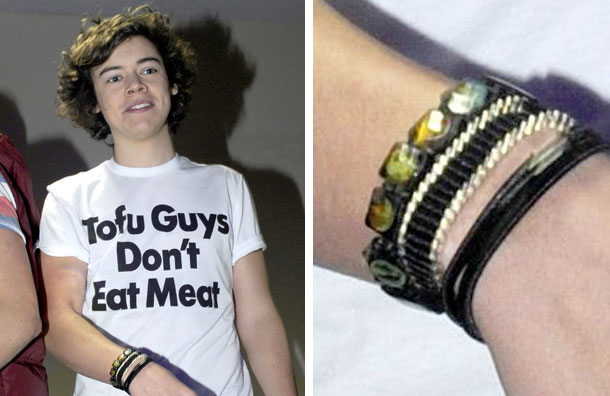 In our heads, we’re singing Jason Donovan’s ‘Sealed with a Kiss’ but we’re replacing the word ‘kiss’ with the word ‘bracelet’ (stick with us) because look at THIS. It’s Caroline Flack, pictured wearing Harry Styles’ bracelet in London this week. We’re going to take this as definitive proof that they’re back together, because only mentals wear their exes bracelets, and Caroline’s a nice lady and not a mental.

The bracelet – a Links of London one, for those that fancy picking up one themselves and imagining that they’re going out with Caroline/ Harry – has been missing from Harry’s wrist, where it normally lives, for the last couple of nights – since Caroline arrived back from her girls’ holiday in India.

Caroline went away before Christmas, and the pair were said to have split up, with rumours that Caroline had ended it after seeing pictures of Harry with other women. She was pictured crying after dropping Harry off on the first night of his tour, which we didn’t like.

The pair first got together in October, after Caroline (THIRTY TWO) and Harry Styles (SEVENTEEN) had a big kissing session in front of plenty of people at an X Factor party. They then started going on dinner dates and Caroline was pictured going into Harry’s house, and coming out early in the morning. Oo-er.

But they have apparently been back in touch since Caroline got home, and must have met up for long enough for Harry to give Caroline his bracelet.

Now just a word of warning Hazza – Louise on our picture desk says that her first boyfriend gave her his sovereign ring to wear on a chain around her neck, but she still dumped him over the phone at a house party. So there’s no guarantees here, but it’s a nice gesture anyway.