I have added one new outtake from Ray Burmiston, 2011, so check it out!

And also, check out the scans here.

It appears Harry Styles has recovered from his break-up with Caroline Flack – he was snapped out with a pretty long-haired blonde this weekend.

The One Direction star, who’s just returned from America, took the mystery woman to West London’s The Social bar in his new Range Rover Sport.

‘Seeing him out so soon after the split will sting a bit for Caroline,’ a source tells Daily Star.

Harry – whose ‘date’ is said to be in her 20s – confirmed last month that he and Xtra Factor host Caroline, 32, had broken up.

Now learnt that the pair were pressured to end their relationship before Harry, 18, left for the US because there were fears about how 1D’s American record label – and fans – would react.

‘Harry’s relationship wouldn’t have gone down at all well in the States,’ says Now’s source.

‘There was a fear that it could damage their reputation before they’d even got started.’

For the whole time they were dating, Harry Styles refused to comment on his relationship with Caroline Flack. But now that the mismatched pair have split up (is it bad to want to write ‘yesssss’ at this point?), he’s suddenly spoken out and made a direct statement about the fact that he ‘didn’t dump’ his ex-missus.

Last night, the Mirror revealed that Harry, SEVENTEEN, had dumped Caroline, THIRTY TWO, in order to fully enjoy One Direction’s tour of the States next month.

But unhappy with sources claiming he ‘doesn’t want to be tied down’, Harry tweeted at 1am (on a school night!) this morning: “Please know I didn’t ‘dump’ Caroline. This was a mutual decision.”

Harry added: “She is one of the kindest, sweetest people I know. Please respect that.”

Well at least Harry has finally confirmed that they were even dating in the first place – we always had that little bit of doubt because it was a bit weird.

Harry and Caroline were first spotted kissing at an X Factor party in October 2011 and have been spotted on dates, in cars and pretty much everywhere else since. The pair have never openly confirmed their relationship – until now – although Caroline has commented in the past that she ‘there isn’t anything wrong’ with dating a younger man.

And although they were dating for around three months, a secret source close to Harry said it was distance that finally split the pair up. Secret source said: “Harry is being realistic about the whole thing.

“He’s going off to America in a couple of days and he wants to be able to commit fully to making the band a success in the States.

“They’ll be back for the Brits, but all in all they’ll be away for two months. It’s a long time to be apart especially with so much going on Harry’s young. He’s just not ready for a long-distance relationship.

Given that Caroline is yet to join Harry in tweeting about the ‘mutual’ split, we’re inclined to believe secret ninja source.

Harry Styles is “head over heels” for Caroline Flack.

The One Direction singer – who started dating the ‘Xtra Factor’ presenter in October – has reassured the TV star that he isn’t worried about their 15-year age gap and won’t give in o criticisms of their romance.

A source said: “Harry’s absolutely head over heels with Caroline and keeps telling her so. But obviously all the hassle their relationship’s had and the fact that he’s a teenager on tour surrounded by young girls has left her feeling uneasy.

“However, Harry’s assured Caroline there won’t be any partying on the One Direction tour. He just has no interest. He can’t believe his luck that he is dating Caroline and is going out of his way to show her how he loves her. He spoilt her rotten with gifts including a Mulberry bag.”

Though she is happy, Caroline, 32, has reportedly told Harry, 17, he should consider getting a girlfriend his own age but he only has eyes for her.

The source told Now magazine: “She’s told him he should be with a girl his own age but he doesn’t listen.

“She even confided that she doesn’t think they’ll last beyond the summer. She does care deeply for him – he makes her laugh.”

Check out this article about Harry and Caroline from this month’s NOW Magazine! Harry to take Caroline to Paris? What do you think? 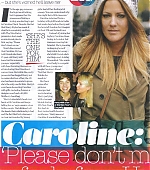 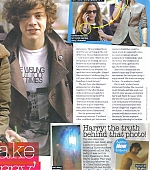 Caroline Flack reckons her relationship with Harry Styles is similar to a romantic comedy.

Journalist Caitlin Moran Tweeted yesterday that she was watching Kate Winslet’s drama film The Reader – and likened it to Caroline’s romance with One Direction’s Harry, which kicked off back in October when they kissed at a party.

‘I’m currently thinking of it as “Harry Styles and Caroline Flack – The Movie.”,’ Tweets Caitlin, 36.

Caroline has been the victim of a lot of criticism – including online death threats – over her relationship with Harry, who’s 15 years her junior.

‘I think there’s something not right about Caroline and Harry’s relationship,’ Rebecca tells Fabulous.

‘For me and Zayn it was different – he was 18 so at least he could drive over to pick me up, we could go for a drink in a bar together and he was old enough to make his own decisions.

‘But Harry is too young for that.’

Harry Styles insists he’s not dating anyone at the moment.

The One Direction heartthrob has been romantically linked with 32-year-old Caroline Flack since they kissed at a party in October.

But the teenage singer doesn’t consider The Xtra Factor presenter, who’s been enjoying a New Year break in India, his girlfriend.

But despite the 1D singer’s declaration, Caroline has defended her close bond with Harry.

The Xtra Factor host was inundated with threatening Tweets when reports first emerged of her closeness to Harry, who’s 15 years her junior.

‘What’s hard for me to get my head around is people saying it’s disgusting,’ she exclusively told Now in December.

‘I think that two people who get on is quite nice.’

Harry Styles cried when Caroline Flack said she was leaving him.

When Caroline Flack told One Direction singer Harry Styles she was going on a month-long holiday to India without him, the teenager was devastated.

‘He was crying,’ a friend of 17-year-old Harry tells Now.

‘He loves spending time with her – he’s fallen for her really hard.

‘He’d fancied her for months before they got together and now he’s turned into a real romantic.

Before The Xtra Factor presenter, 32, jetted off, the pair enjoyed two romantic sleepovers in four days – the first at Caroline’s place and the second at Harry’s north London flat.

Harry even took to Twitter to defend his girlfriend after she received a barrage of abuse.

He told fans: ‘I think people should think more before they Tweet.

I’ve added 3HQ scans of this January’s Top Of The Pops issue. Check them out! 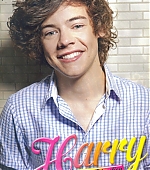 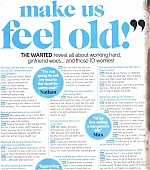 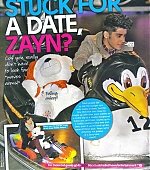