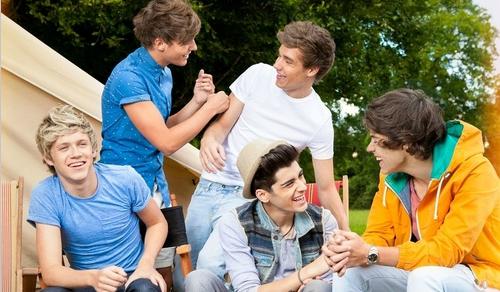 I have pre-ordered one copy of the LWWY single for one lucky winner! We held giveaways in the past, however, this time, there is no question to answer! However, it is only open to UK residents (Northen Ireland, Scotland, Wales and England) unless you’re willing to pay for the postage. If there are more than 100 people wanting to participate in the giveaway, I will pre-order another copy so that there will be two winners! All you have to do is email me @ admin@harrystylesfan.org with this form (with your title being LWWY Giveaway Form): 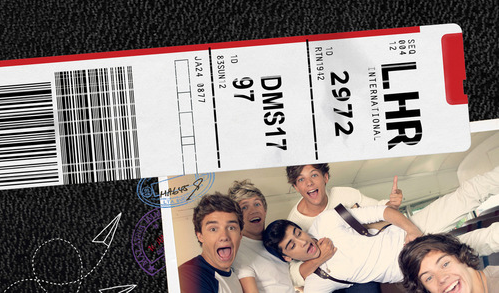 Their new album called ‘Take Me Home’ will be available from the 9th November 2012! You can already pre-order it on iTunes for $20.99.

Are you planning on buying One Direction’s 2013 official calendar? Are you wondering what it’ll look like? Here’s a photo of the apparent front cover!

I also wanted to let you know that I’m updating the Private photos in our gallery! Click here to view them!

Niall Horan, Zayn Malik, Liam Payne, Harry Styles and Louis Tomlinson have long been rumoured to be performing at the music extravaganza on Sunday.
Now The Daily Mirror are claiming that the boyband are hard at work preparing for a five-minute slot.
A source said: ‘It’s all hush-hush and the boys have been sworn to secrecy.
‘But they’ve been at rehearsals and can’t wait to do their bit. It will be an unforgettable occasion and they feel privileged to be a part of it.’
The group will reportedly perform their hit song What Makes You Beautiful on ‘flat-bed truck’ which will drive around the athletics track at the Olympic Stadium in Stratford. Days after Zayn got his new microphone tattoo, Harry got some new ink, too!
Harry Styles of One Direction has been showing off his new tattoo! Harry and Zayn Malik have both gotten new tattoos from legendary tattoo artist Kat Von D… Will the rest of the boys follow suit?

Harry’s newest tattoo, a scroll of text next to the star on his upper arm, reads “Won’t Stop Till We Surrender.”

Zayn’s freshest ink is a microphone, also on his arm. Rumor has it, Zayn is the resident “One Direction Bad Boy!”

Fans are starting to wonder if this is a trend among the rest of the band members. Will Louis, Liam and Niall start getting inked up as well? OceanUp reported that during a concert on June 16th, the rest of the band lovingly teased Zayn about his microphone tattoo, so we don’t think the other three boys are in any rush to get permanent art!

ALL ABOUT ONE DIRECTION!
Their Story, Songs, Style & Secrets!
Plus: Over 175 Hot Pics and Fun Facts about Each Guy

(NEW YORK, June 6, 2012) –In just two years, the One Direction gang – Zayn, Niall, Louis, Liam, and Harry – have gone from being X-Factor contestants to becoming the hottest boy band on the planet. They’re racked up hits, their live tour created an international sensation, and they’ve mesmerized millions of devoted fans who just can’t get enough of the charming quintet. In honor of 1D Mania – and the band’s U.S. tour ending in August – PEOPLE magazine celebrates with a special collector’s issue featuring a giant pullout photo, more than 175 hot photos, and fun facts about each guy.
Highlights from PEOPLE’s One Direction Collector’s Special:

HARRY: The backstory on the boy with the megawatt smile who’s become one of the band’s biggest heartthrobs. So what’s next for the singer, who brings big sister Gemma, 21, on tour with him and who – while traveling – stays close to his mom with frequent text messages? “We want to have No. 1’s, travel a lot, go back to America and have as much fun as possible,” the singer said. “I don’t think that’s too much to ask.”
Fun facts: He speaks French; he can juggle; his celeb crush is Rhianna.

LOUIS: 1D’s funniest member is notorious for spending the most time doing his hair and splurging on clothes. And he seems to be looking for a girl a lot like himself. “I like someone who doesn’t take like too seriously,” he tells PEOPLE. “Someone you can have a good laugh with.”
Fun facts: He likes to surf and bungee jump; his first celeb crush was Emma Watson; he’d want Leonardo DiCaprio to play him in a movie.

ZAYN: He has movie star looks and a quiet demeanor, and can’t get enough of fashion, video games, and his four “brothers” in the band. “Before doing X Factor, I hadn’t done anything that required me to speak in front of cameras,” Zayn explains. “I had confidence issues. The X Factor helped me with that.”
Fun facts: He can’t swim; he can read Arabic; he’s afraid of heights.

LIAM: He’s known as the mellow, serious one, but Liam is also a proven fighter – battling bullies, stage fright, and a harrowing health crisis as a child. The athlete of the band, in high school he played basketball and succeeded as a long-distance runner. And when bullies started to pick on him, he learned how to box to defend himself. “I wanted to become a boxer,” he said, but that all changed once X Factor came calling: “You can’t turn up onstage with bruises.”
Fun facts: At 5’11”, he’s the tallest 1D member; he nearly became an Olympic runner; he broke his nose boxing.

NIALL: A native of Ireland and the lone blond of the band, Niall is the most laid-back if 1D and the biggest foodie – plus he plays guitar. He also trained as a jockey as a kid. Talking about things he’d love to splurge on one day, he tells PEOPLE, “I’ll probably end up buying a few racehorses.”
Fun facts: He’s dyed his hair blond since he was 12; his celeb crush is Demi Lovato; he’s claustrophobic.

PEOPLE’s Special Collector’s Issue on One Direction is on newsstands June 8 – June 29.

There was no immediate confirmation from Sony Pictures, and the movie announcement is not among the company’s recent news releases.

The band will be on a world tour in 2013, tentatively beginning June 13 at Fort Lauderdale and ending Aug. 8 in Los Angeles.

The singers got their start in 2010 as contestants on “The X Factor.” They finished third in the group category.

The album produced four singles, “What Makes You Beautiful,” “Gotta Be You,” “One Thing,” and “More Than This.”