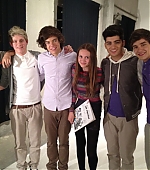 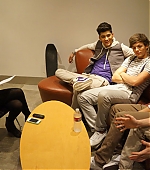 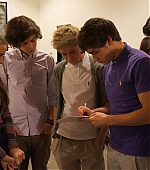 Maude: How do you guys like the United States?
Harry: We love it.
Liam: It was a shock to get to the airport and actually see that the fans have grown from 40 people to like 500. It’s amazing.
Louis: And also you can’t beat the weather. Coming from the UK where it’s freezing cold.
Harry: We’re wearing little tee shirts and everyone’s wearing coats.
Maude: What were your first impressions of each other when you guys got thrown together as a band? Do you all get along?
Zayn: Before we got together as a band we were kind of each other’s competition because we’re from the same category [on X Factor]. But as soon as we got put together we all got on really well. We all went to Harry’s place and stayed there together to get to know each other.
Harry: We were all going through this new experience, we all kind of entered it in the same mindset. It was like we were all starting school.
Louis: Similar ambitions, similar goals. I suppose that’s why we got on together.
Liam: For first impressions, I think you [Louis] were the most different from what we thought you were. When I first met you, you were so quiet, so down played. I think it was after we left the coffee shop in Birmingham, where suddenly this character came out of nowhere.
Louis: Yea, I was quite quiet at boot camp. But as far as first impressions for me, I thought Zayn was more quiet. The more I get to know Zayn, he’s definitely not quiet. Harry was still quite charming, pretty boy. Niall was loud, really loud. Honestly, I would have gone away thinking Niall was the king of boot camp. He was the leader of boot camp.
Maude: How involved is Simon in your lives now? Harry: Simon kind of hung back a bit and let us do what we wanted to do with it. I think that was good because it made things a bit more authentic. He still has the last say on everything we do. Louis: He’s the boss.
Maude: What famous person have you met so far that’s given you the biggest thrill?
Zayn: I was a big Michael Jackson fan and we got Jermaine Jackson on the X Factor.
Louis: For me, Robbie Williams was a massive influence when I was growing up. But also Cheryl Cole. Being in her presence was intimidating, because she’s so hot.
Harry: When we first met Simon, we’d go into the dressing room and talk to him normally. And then we came out, we’d be like, “we’ve just been in the same room as Simon Cowell, had some bananas…it was so weird!”
Liam: Robbie Williams is a big one for me. As well as Bon Jovi. We got to perform with him during a group song.

Maude: How are British and American One Direction fans different?
Liam: The American girls are very confident.
Louis: And the English girls wear more coats.
Maude: Would you say each of you has a specific style?
Zayn: Mine is a bit more urban, more street. Nike trainers, varsity jacket. Louis is a bit more “fashion.” More staples: stripes, braces, really tight trousers. Harry is quite preppy.
Louis: Kind of smart. Blazers. Niall is quite casual. Do you think?
Zayn: Liam is more like… American casual.
Maude: How would you describe your sound?
Liam: We’ve always described our sound as a bit more guitar driven than normal pop music. Kind of Pink in a boy band form. We’ve heard a few people say that so now we use it. I think Pink is amazing person to be compared to.
Harry: We like pop music but instead of using synths, we like using our hands. Guitars. Drums…
Maude: What musicians do you look up to?
Louis: I supposed in terms of influence: Take That, New Kids on the Block.
Zayn: People like Pink. Katy Perry is amazing. Bruno Mars is amazing. McFly. They’re cool as well.
Maude: Most played song on your iPod?
Zayn: Probably a Chris Brown tune. Something off his new album.
Louis: “Look After You,” by The Fray.
Louis: “Viva Forever,” Spice Girls.
Harry: Ha. “Paradise,” by Coldplay.
Niall: “Wanted Dead or Alive,” by Bon Jovi.
Liam: Probably a John Mayer song off Where The Light Is. I can’t remember the name, its track 2 or 3…
Niall: “In The Atmosphere?”
Niall: Yes, yes.
Maude: Who are your favorite new artists? New bands?
Louis: Ed Sheeran. He’s very very good. You should look him up.
Zayn: Bruno Mars is wicked.
Maude: When did you realize everything changed? That your life changed.
Zayn: When we were on The X Factor, we didn’t realize how overnight the fame thing was. We didn’t really understand it until we went on a shopping trip. It was like Week 7 or 8 of the show. We went with a few other contestants and there were loads of people, packed.
Louis: We later found out the sale was on, and that was the reason everyone was there.
Maude: How are your parents reacting to this?
Zayn: Our parents are obviously proud, but they’re still trying to get used to the fact that we’re in a band. I have a feeling my mom would actually like One Direction if I wasn’t in it! Liam: They’ve all got the same sort of mom thing where they’re all really upset when that we leave home but at the same time they know we’re going out and enjoying what we do. But they miss us.
Louis: I’ll tell you what’s been really nice about this whole experience that we never really bring up in interviews is the fact that obviously it’s a great experience for us, but also we also make our moms proud. We’ve found friends in each other, but also our parents are friends.
Harry: Our families always come and support us. This is all happening, yet our families keep us grounded.
Maude: Your first stateside single, “What Makes You Beautiful,” comes out Valentines Day in the US. What are you guys planning on doing on Valentine’s Day?
Liam: We’re actually meant to be in France. There’s a trip lined up to Paris. The City of Love!
Louis: If we haven’t got any dates, well all just have to go out to dinner together. Otherwise we’re gonna be pretty depressing to be honest.
Zayn: All five of us are going to sit in the Eiffel Tower restaurant together. Niall: Finish each other’s spaghetti and stuff like that.
Maude: What’s your scariest moment with a fan? What’s the weirdest, craziest fan?
Liam: We were in Heathrow once, and there were about 500 girls at the airport. We went out the side door to try to get to our car but we couldn’t get to it. Zayn’s hoodie got ripped off. I got a good whack in the face.
Zayn: There was a security booth outside and it was all glass. People were licking the windows. It felt like we were in a zombie movie.
Louis: This box was really small. We were really crammed in. There was staff asking for photos.
Zayn: That was one of the craziest. Someone once asked Liam if he’d lick their face.
Liam: No someone asked to lick my face.
Louis: If I was a fan and I actually had the wish to lick Liam’s face, I wouldn’t ask. Cause you know what the answer’s gonna be. I would have just gone for it.
Zayn: So you’re encouraging people to lick our faces?
Maude: What’s it like staying at your hotel in Los Angeles and having girls camping outside?
Zayn: We’ve been surprised by the amount of people that recognize us. We haven’t released anything, we haven’t done any promos, so we didn’t expect anything like that. So to come out here and see that type of support, that type of following. It’s amazing to see that. We’re really happy.
Liam: We’re all a bit nervous. Just to see a good reaction would be such a massive confidence boost. We’re excited for the single to come out.
Maude: I have friends who are standing outside the hotel waiting for you guys.
Louis: Wow!
Maude: Well, I think that’s it!
Louis: Can I just say, I think you did a great job.
Boys all applaud!
Maude: Gosh, thank you! I was so nervous!
Zayn: If we do Teen Vogue again, we only want to work with you!