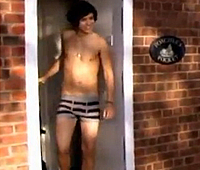 BREAKING NEWS: Harry Styles of One Direction enjoys freeing his manhood and getting naked. Didn’t you know? Oh wait, EVERYBODY KNOWS because he doesn’t stop talking about it. Not that we mind him talking about it. In fact Harry we’d like some more details, why is it you like to get naked?

– For the light breeze circulating your nether regions?
– For Larry Stylinson related banted?
– Because you keep wetting yourself?
– Because you’re just damn proud of your downstairs situation?

Either way, during this time of festive cheer and reflection, we’ve decided to look back over all Harry Styles’s naked quotes and moments. Think of it as our Christmas present… to you, starting with this cracker…

Louis Tomlinson told Celebs on Sunday: “Harry likes to pull his trousers down. You do Harry, you’re always getting your bum out.

“I’ve been asleep before and Harry has hit me round the head with his penis.”

“It actually wrapped around my whole face. Who wouldn’t be envious of that?”

Harry to We Love Pop mag on posing naked:

“[I’d do it for] about a hundred quid? Our stylist wants me to do a shoot in a mankini. I’m up for that.”

Louis Tomlinson: “If everyone’s seen your willy, then what have you got left to surprise them with?”

Harry Styles: “My worst habit is getting naked all the time.” 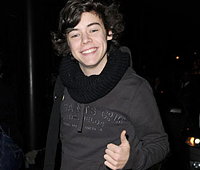 On being naked in the X Factor house…

Harry told The Sun: “I have great memories…especially all of the times I went naked. Stripping off is very liberating, I feel so free…no-one seemed to mind. I think Mary (Byrne) secretly liked it. My confidence came out in my nakedness.”

Aiden Grimshaw told GT mag: “‘Harry Styles used to run around with his c**k out all the time.”

Harry Styles told The Sun: “I had to do a naked video clip for ITV2 where I was standing there with no clothes on and the boys had to pass various objects across me, keeping certain parts covered… but at one point Zayn didn’t move the book he was holding quickly enough and the cameraman got a bit of an eyeful. I think you could safely say I’m not shy.”

Alan Carr: “Now Harry, is it true you were stripping off on the plane on the way to America?”

Liam Payne: “I was sat next to him when he was taking his clothes of.”

Liam: “The best thing was that he got up and went to the toilet, in nothing but the blanket. Just went to the.. Who does that?”

Alan: “Harry, have you never been on a plane before!? You can’t do that!”

Harry: “It was warm in the cabine! It was hot up there!”

Alan: “But there was other people on the plane!”